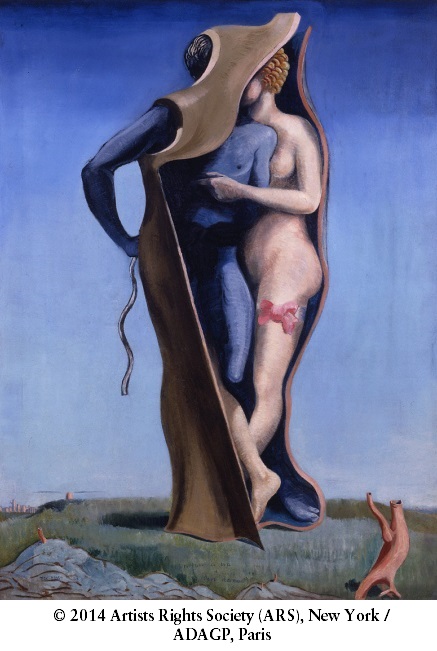 This painting shows two nude bodies with legs intertwined. The female body is painted in naturalistic colors. She wears a pink ribbon on her thigh, suggesting a garter. She hugs the back of the male figure, who is painted in blue, the same color as the background sky. Their two faces are hidden by a cape surrounding them, the color of which suggests rusty metal. The title of "charming country" seems ironic, because in spite of the blue sky, the landscape is a desert, with mysterious pink forms that resemble veins or dissected organs.

In 1918, Europe had seen the end of the First World War and the terrible epidemic of influenza, two phenomena which caused the deaths of millions of people. For many young artists and intellectuals, logical reason had disappeared forever, giving way to cynicism and the notion that the world is absurd.

During the 1920s, many artists tried to explore the world of dreams and the unconscious. This world was considered more real and true than the so-called "reality" perceived by the intellect, and therefore it was "surreal." The most famous artists of surrealism were Salvador Dali, René Magritte, and Man Ray. Surrealists were inspired by the French painter Henri Rousseau (called Rousseau the Customs Agent, who died in 1910), and by French writers like Guillaume Apollinaire, Paul Éluard, and André Breton.

Max Ernst (1891-1946) was born in Germany, but lived in France for most of his career. He became part of the surrealist and Dada movements. In 1923, he was living in Paris with the poet Paul Éluard and Eluard’s wife, Gala. Gala was an artistic inspiration for Éluard, Ernst, and Dali, and Ernst’s paintings sometimes resemble Dali’s works, with their anatomical shapes and references to the unconscious.