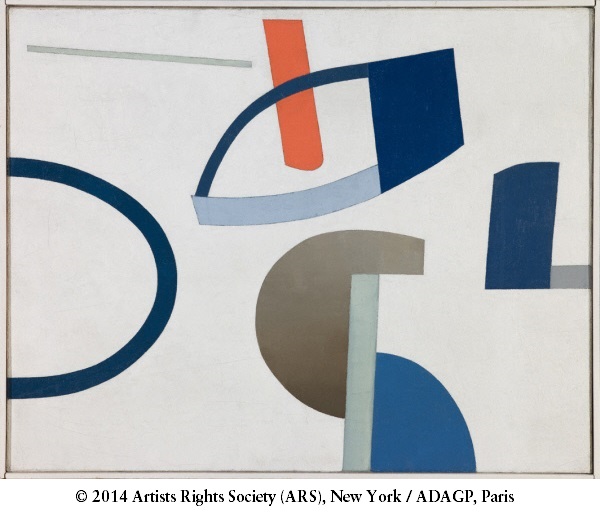 In this painting, we see geometric but irregular shapes, elongated or compressed in unexpected directions. The colors are in the palette of blues and grays, except for a block of orange in the upper middle.

The period between the two World Wars was a difficult time in Europe. After the financial crash of 1929, the economy suffered in Europe, as well as in the United States. Frustration with traditional values led many artists to reject the art of previous generations.

Artistic abstraction abandons any attempt to represent "things," in favor of exploring ideas. Freed from the obligation to create art that resembles anything at all, the artist could concentrate on color, form, or technique. For the abstract artist, self-expression often plays a more important role than communication with the viewer.

Jean Hélion (1904-1967), born as Jean Bichier, was an architectural draftsman before becoming a painter. He admired the Dutch painter Piet Mondrian, who made geometric compositions with primary colors. Hélion was the founder and a member of a group called "Concrete Art," which was dedicated to pure abstraction.