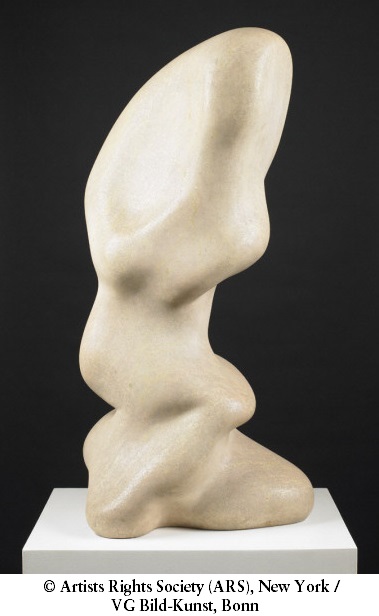 This stone sculpture seems to represent an abstract form growing out of a female body. The title refers to the female sexual organ of a flower, suggesting sensuality. The work has been described as "biomorphic," because its shape resembles something living, without necessarily being realistic or recognizable.

In 1918, Europe had seen the end of the First World War and the terrible epidemic of influenza, two phenomena which caused the deaths of millions of people. For many young artists and intellectuals, logical reason had disappeared forever, giving way to cynicism and the notion that the world is absurd. These feelings continued after the Second World War (1939-1945).

During the 1920s, many artists tried to explore the world of dreams and the unconscious. This world was considered more real and true than the so-called "reality" perceived by the intellect, and therefore it was "surreal." The most famous artists of surrealism were Salvador Dali, René Magritte, and Man Ray. Surrealists were inspired by the French painter Henri Rousseau (called Rousseau the Customs Agent, who died in 1910), and by French writers like Guillaume Apollinaire, Paul Éluard, and André Breton.

Jean Arp (1886-1966) was born in Strasbourg, first under German citizenship, and later under French citizenship. He was a poet, a friend of Paul Éluard, and in 1916, the co-founder of the Dada group. This group borrowed the word dada, which means hobby horse, from the vocabulary of young children, in order to make fun of "serious" art and literature. His sculptures, which became more and more abstract, brought him international fame.