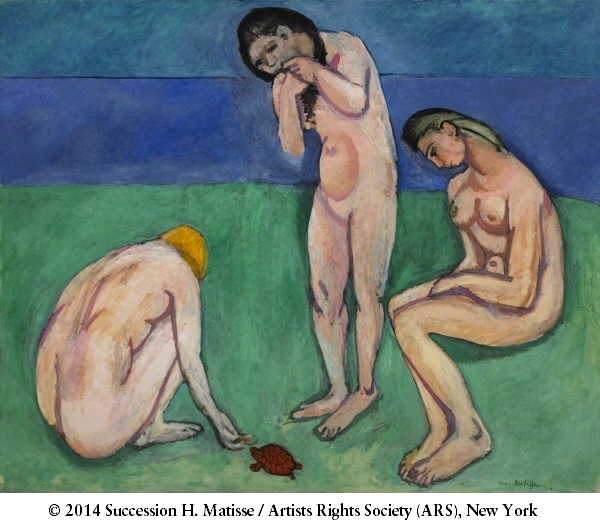 Three nude women are looking at a small red turtle. Their nudity and the blue background suggest that they are at the beach, but the color behind them is green. The grayish face and gestures of the woman in the center seem to reflect anxiety, but the other women are leaning toward the animal, with curiosity or tenderness.

By the early twentieth century, a series of World’s Fairs (Chicago in 1893, Paris in 1900, and St. Louis in 1904) had introduced many people to the contemporary art being produced in Europe. Galleries encouraged collectors’ interest in works considered "avant-garde."

Henri Matisse (1869-1954) was considered the leader of the fauvists. His paintings were shown in the New York Armory Show in 1913, and represented the most modern art that had ever been seen. In 1925, Matisse was made a Chevalier of the Legion of Honor. His works include painting, sculpture, drawing, and cut-out watercolor, a form of collage.