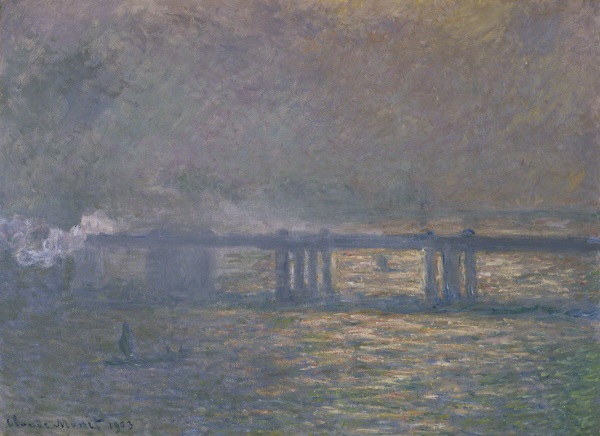 In this painting, the city of London seems to have disappeared in a thick morning fog, and we only see the Thames river, a solitary boat, the bridge, and the smoke of a passing train. The palette of colors is subtle, dominated by violet. The artist has captured the ephemeral quality of the light, which would have changed from one moment to the next.

In the second half of the 19th century, industrial manufacturing and the railroad systems were greatly expanded throughout Europe. Urban centers like London and Paris became much larger as people moved from rural areas to the city, to find jobs.

Claude Monet (1840-1926) is considered to be the father of impressionist painting. His work Impression Rising Sun (1872) inspired the title of the movement. Monet went to London for the first time in 1870. While there, he was greatly inspired by the works of the British painter J.M.W. Turner (1775-1851). Twenty years later, Monet made several more trips to London between 1899 and 1901. After returning to his studio in Paris, he continued to work on sketches from his travels, until 1904. He produced nearly 100 paintings representing scenes of London.