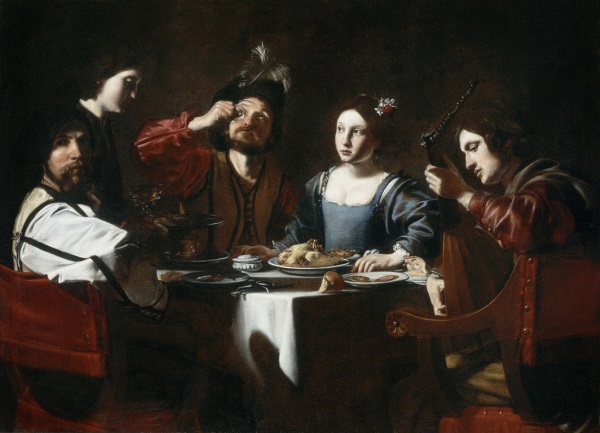 This scene shows a group of people at a dinner table. The white tablecloth and the presence of a lute player, in conjunction with their elaborate clothing, indicate that the celebrants are people of the upper middle class, not peasants. The presence of only one woman, in the company of men, suggests that she might be a courtesan. The man on her right is emptying a glass of wine, and this gesture suggests the vice of overindulgence. However, the artist respects good taste by giving the people in this scene facial expressions that are serious and dignified. The artist’s technical mastery is seen in the realism of the faces, the texture of the surfaces, and the play of intense light.

Louis XIII (1601-1643) inherited a kingdom in which there was ongoing conflict between Catholics and Protestants. Cardinal Richelieu was his Prime Minister, from 1624 onward. Richelieu’s influence led to a military victory over the Protestants of the city of La Rochelle and the suppression of the power of the highest-ranking nobles.

In the first half of the seventeenth century, "genre" paintings were very popular. These paintings showed scenes of daily life, and often also told a story. Here, the spectator is invited to imagine the reason for this banquet, and who the people might be in this theatrical vignette. Another French artist who was very famous in this style was Georges de la Tour.

Nicolas Tournier (1590-1639) was a painter in the realistic style, influenced by the Italian artist Caravaggio. The "French Caravagesques" used exaggerated contrast between light and dark, called chiaroscuro in Italian. Tournier’s known works are few in number, but of very high quality.