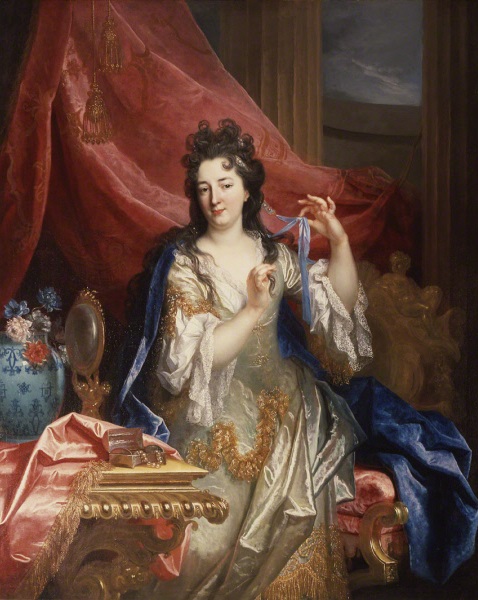 This portrait shows a noble lady in her dressing room. She is surrounded by furnishings that reflect her wealth, such as the Chinese vase, the gilded table, and the box of jewels from which a necklace of pearls is spilling out. She is wearing a lace gown with golden fringe, under a cape of blue velvet.

King Louis XIV (1638-1715) established his court at the Palace of Versailles after 1685. In order to restrict the influence of the most powerful nobles, he forced them to live at Versailles with him. One form of royal favor was the permission to be present during the king’s private moments, such as when he woke up in the morning or when his servants assisted him to get dressed. The nobles imitated this practice themselves, and it became fashionable to receive friends in one’s dressing room or bedroom. Dresses for these occasions were as highly decorated and expensive as dresses that were worn for other social events.

Aristocratic portraits at this time displayed elements that conformed to the subject’s high social rank. Men were often seen with military swords, and women were often seen in elegant clothes, with objects that suggested femininity, such as flowers. In this portrait, the lady’s direct gaze reflects her self-confidence, and her gesture of tying a ribbon in her hair implies that she is very attentive to her beauty.

Nicolas de Largillière (1656-1746) was one of the most highly praised artists of the second half of Louis XIV’s reign. He was admired for his realistic technique and for his talent in capturing the personality of his subjects.