Nicolas Colombel, Christ Expelling the Money-Changers from the Temple, 1682 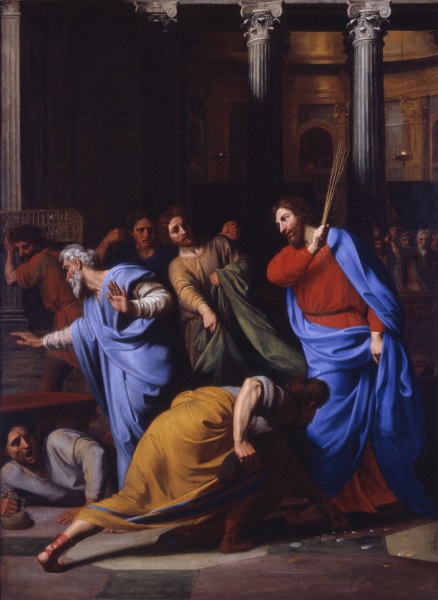 This painting represents the New Testament scene in which Christ chased away the merchants and moneylenders who were desecrating the temple with their worldly activities. The background of the painting resembles the Pantheon, an ancient temple in Rome. The diagonal positions of the characters, the lively colors, and the intense light add to the dramatic nature of the scene.

In the seventeenth century, a vast quantity of artworks was commissioned for the decoration of churches, royal palaces, and the houses of the nobility. The technical quality of the artwork, and the importance of its subject, reflected the education and good taste of the person who commissioned it.

The most highly regarded category of painting dealt with subjects from mythology or the Bible, and was called "history painting." It was usually done in a large format.

Nicolas Colombel (1644-1717) studied painting in Rome. While there, he was very much influenced by the works of Nicolas Poussin (1594-1665), a French artist who had spent the majority of his career in Rome. After he returned to France, Colombel was admitted in 1694 to the Royal Academy of Painting and Sculpture. He became a Professor there in 1701.