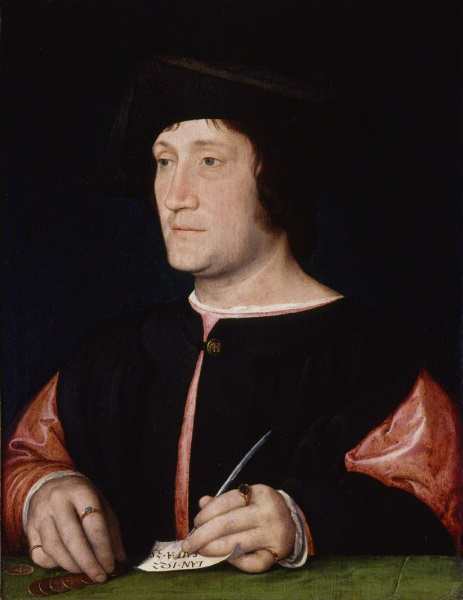 The subject of this portrait is unknown. He knows how to read and write, according to the pen in his left hand, and the paper indicates that he is thirty-five years old. ("A35" means "aetas 35 anni" in Latin). His right hand is touching several gold coins, which suggests that he is a banker or an accountant. Even if he is therefore not noble, the red silk of his shirt and the gold rings he is wearing indicate that he is employed by someone of great importance, perhaps the king.

At this time, King Francis I (1494-1547) reigned in France and King Henry VIII in England. The royal court at Fontainebleau was famous for its encouragement of fine arts, and it was very fashionable to commission a portrait, both for nobles and for the upper middle class.

In the 16th century, the portrait was a way of preserving not only a person’s appearance, but also his social rank and his identity in relation to other people. The artist paid particular attention to the tactile qualities of cloth and precious stones. Realistic detail was much admired, even if the artist always had to idealize somewhat the features of his subject.

Jean Clouet (c. 1485-1541) was the most important portrait artist at the French royal court. In 1516, he became one of the official King’s Painters, and around 1530 he painted the most famous portrait ever made of Francis I. Clouet is considered the artistic equal of the German painter Hans Holbein the Younger, who made the most famous portrait of King Henry VIII of England.