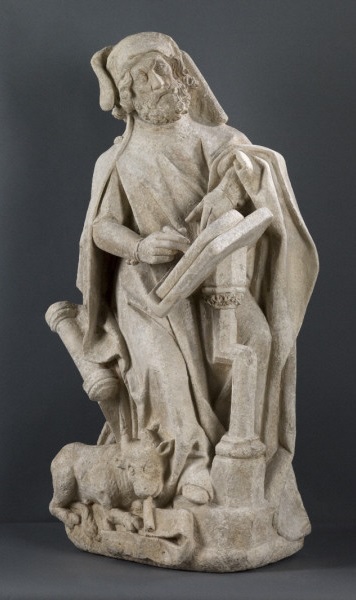 This stone sculpture shows St. Luke, the author of the Third Book of the Gospel and the Acts of the Apostles, seated at a writing desk. He was a medical doctor, and once made a portrait of the Virgin, and therefore he became the patron saint of doctors and artists. The sculpture shows the saint writing or drawing on a tablet, and the angle of his head suggests that he is thinking. One of St. Luke’s symbols was the ox, an animal used in ritual sacrifice, and we see a tiny ox at the lower left of the statue. The scroll carrier above the ox was used to carry parchment documents.

In the 15th century, after the invention of the printing press, there were many more people who learned to read and write, at least among the nobility and upper middle class. We see St. Luke wearing the clothing of a scholar of the contemporary era of the 15th century, and the decorated desk looks like what one might see in a church or an important school.

Artists of the Renaissance were interested in individuality, and portraits in painting or sculpture often evoked a particular person instead of a generalized ideal. Even in religious sculpture, the artist wanted to represent a real man, with whom the viewer could easily identify.