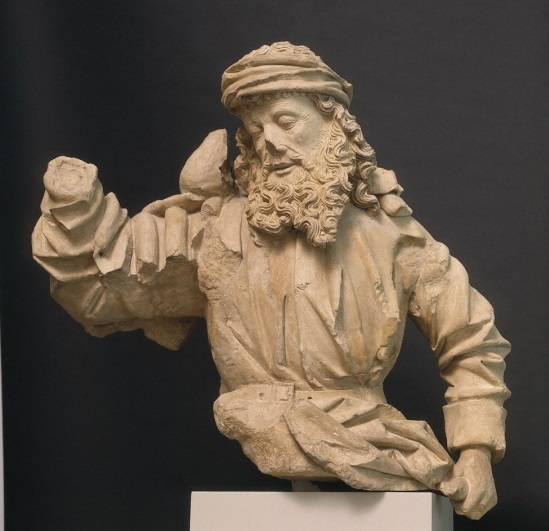 This stone sculpture was found broken into pieces near Arras, in the region of Artois, in the north of France near modern Belgium (formerly Flanders). Even if it is only a fragment, the realistic representation of the body and face of the saint is striking. According to the legend of St. Christopher, he helped the child Jesus cross a river, and he therefore became the patron saint of travellers. In art, he is often shown with the child Jesus on his shoulder, and we can still see a knee and a small foot on the statue’s shoulders. The buckled belt is a modern detail which places this man in the contemporary world of the 15th century, and his lined face shows his maturity.

Until 1477, the region of Artois belonged to the Duke of Burgundy, Charles the Bold. After his death, it was rejoined to the territories of France. At this time, there were many rich patrons for artists, and it is not surprising to find a sculpture of such quality in this region.

Artists of the Renaissance were interested in individuality, and portraits in painting or sculpture often evoked a particular person instead of a generalized ideal. Even in religious sculpture, the artist wanted to represent a real man, with whom the viewer could easily identify.