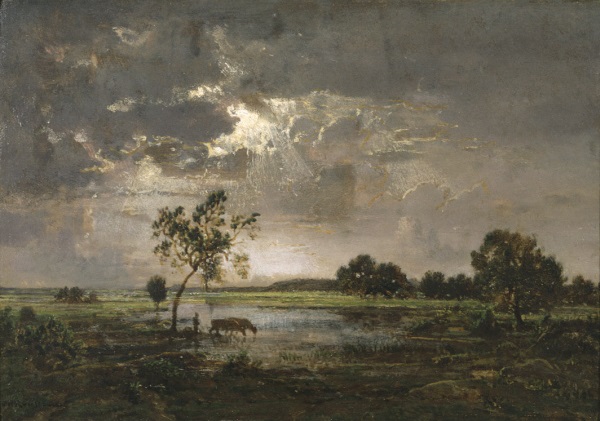 The dimensions of this painting are fairly small. It represents, however, a vast landscape. We see a man and several cows at the edge of a tranquil pond or river, but the sky is turbulent, with a white light penetrating through the clouds.

The first constitutional monarchy of France, called the "July Monarchy," lasted from 1830 to 1848. Louis-Napoléon was the last French king. France had a period of prosperity, marked by the expansion of the railroads and a major urbanisation. This inspired many artists to turn their attention to the natural landscape that was still untouched by industry.

Théodore Rousseau (1812-1867) was born in Paris. His works were exhibited at the Paris Salon between 1831 and 1835, but after they were refused in 1836, he settled in Barbizon. He became one of the first painters associated with what later became the "School" of that name.