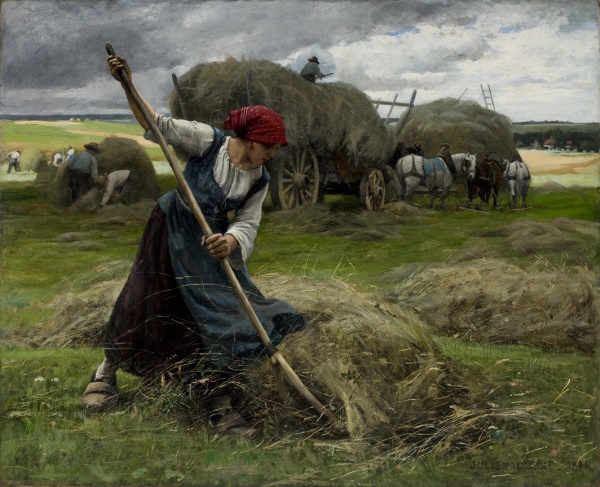 This painting shows a young peasant woman who is part of a group harvesting hay. The painting has vivid colors, and one can observe that the woman’s clothing have the colors of the French national flag. The style is very realistic, with brushstrokes that suggests the bit of hay flying through the air. The scene is nevertheless idealized, because it gives no idea of the strenuous and difficult nature of the work. The only negative element is the clouds at upper left, which indicate a coming storm. This might require the participation of women in a task that was normally for men, to bring in the harvest before the rain arrived.

In 1884, the "Belle Époque" flourished in Paris. The middle class had grown due to economic prosperity, and many people wanted to beautify their houses with paintings of attractive scenes. A well-executed image of farm fields, with industrious peasants, would be easy to sell.

Around the middle of the nineteenth century, many artists reacted against romanticism. They made works about daily life, shown just as it was, without embellishment. This movement is called "naturalism" or "realism." Romanticism, however, remained very popular, and there were many works which seem to have elements of both movements.

Julien Dupré (1851-1910) studied at the School of Fine Arts in Paris. He received the Gold Medal at the Paris Universal Exposition in 1889, and he was named to the Legion of Honor in 1892. He is associated with the second generation of painters of the Barbizon School, but his works also show the influence of romanticism, with idealized images of peasants.