Jean-Léon Gérôme, The Sentinel at the Sultan’s Tomb, c. 1880 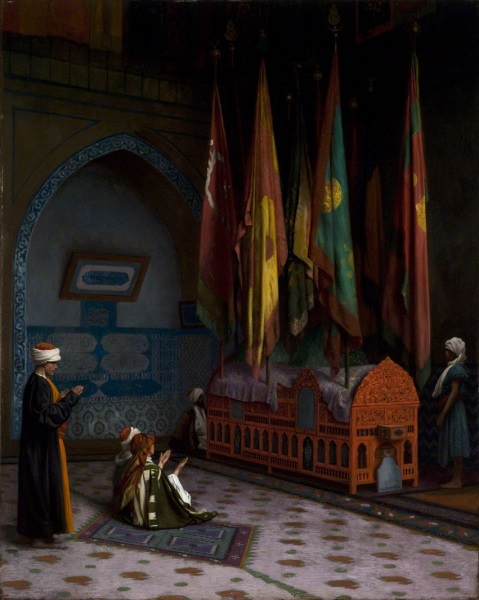 The subject of this painting is a 15th-century mausoleum in Boursa, Turkey. It shows two men holding a religious vigil, making their prayers in front of the tomb of the deceased sultan. The light seems to come from behind the viewer, and our eye is drawn to the bright colors of the tomb and the flags. The precise details of the costumes and the realistic style make it seem like the stage setting of a play.

During the 1870s and 1880s, France was beginning an expansion of its colonies in Africa, Indochina, Madagascar, and other countries. The Sultan of the Ottoman Empire was an ally of the French government. Images of Turkish life were therefore a subject of curiosity without any political threat.

Jean-Léon Gérôme (1824-1904) was a painter and sculptor. He taught for many years at the School of Fine Arts in Paris. His style reflected the admired Academic virtues, which were opposed to the Impressionism of the same period. He was often inspired by scenes of the Middle East, which had been popular ever since Ingres (The Grand Odalisque, 1814). During his lifetime, Gérôme was considered one of France’s most important artists.