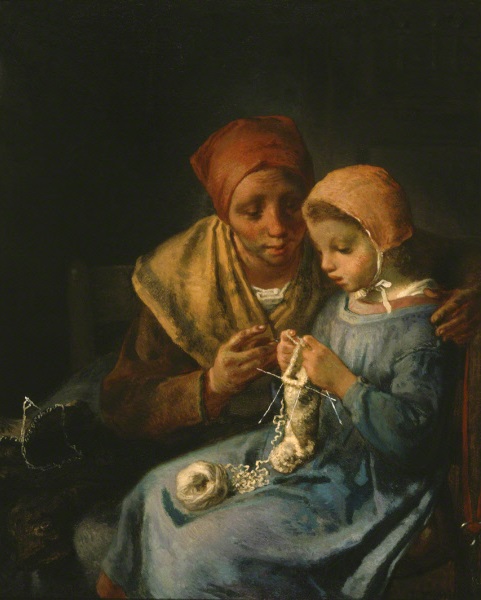 This painting shows a woman and a child, perhaps a mother and daughter. Their simple clothing and the tanned face of the woman identify them as peasants. The universal subject of teaching, and the absence of contemporary details in the dark interior, make this painting a thematic and stylistic counterpart to Dutch works of the 17th century. The slightly idealized face of the girl, and the tender gesture of the woman putting her hand on the girl’s shoulder, give a sentimental quality to this scene.

In 1869, France was under the rule of Napoleon III, but there were political troubles on the horizon. The Franco-Prussian War would break out in 1870, and the French defeat at its end would result in the Revolt of the Commune in 1871. By observing closely the life of poor people in the countryside, artists like Millet were making an indirect comment on the politics of the time, and on the unequal distribution of wealth.

Around the middle of the nineteenth century, many artists reacted against romanticism. They made works about daily life, shown just as it was, without embellishment. This movement is called "naturalism" or "realism." The Barbizon School was the name given to a group of painters who lived for a time in the village of Barbizon, near the forest of Fontainebleau, and who loved to paint landscapes and peasants.

Jean-François Millet (1814-1875) was born a peasant, and spent his childhood working on a family farm. Thanks to an uncle, he was able to receive a good education. After living in Cherbourg and Paris, he settled in Barbizon until his death. He always retained sympathy for the working class, and his most famous work is The Gleaners (1857).