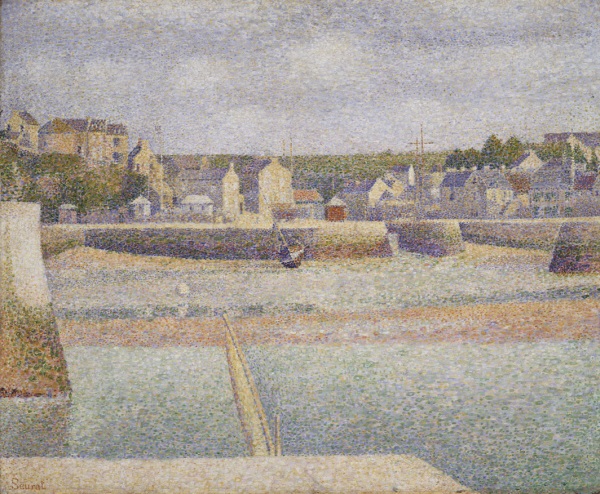 In this painting, we see the docks of the town of Port-en-Bessin-Huppain, in Lower Normandy. In the foreground, we see the mast of a sailboat which is otherwise hidden from our view. In the background, we see exposed rocks and a boat leaning on its side, waiting for the high tide to set it afloat. We see the houses of the town and green hills on the horizon. Seen from a distance, the touches of strong color like red and green dissolve into pastels, and the atmosphere of the painting seems calm and static.

In 1888, the city of Paris was preparing for the Universal Exposition of 1889, for which the Eiffel Tower was being built. The Exposition would celebrate advances in industrial technology, and sciences such as optics were attracting interest. Seurat spent his summers in Normandy.

The impressionist movement was a revolt against the academic tradition. Instead of representing objects in a realistic manner, with precise lines and perspective, artists sought to capture a moment of experience as it was lived. They left the studio to paint outdoors, and tried to re-create effects of light with soft brushstrokes and bright colors. Seurat used an original technique, today called "neo-impressionism" or "pointillism," because the painting was created from small touches of contrasting colors. When seen from up close, the effect is confusing, but when seen from a distance, they form objects through optical illusion.

Georges-Pierre Seurat (1859-1891) was born in Paris. His father worked for the civil courts. He studies at the School of Fine Arts in Paris. In 1886, with the painter Paul Signac, he developed a visual technique that they called "divisionism," based on dividing colors into their primary elements. Seurat died young, at the age of thirty-one. During his lifetime, he completed only seven major paintings, of which the most famous is Sunday Afternoon on the Island of La Grande Jatte (1885).