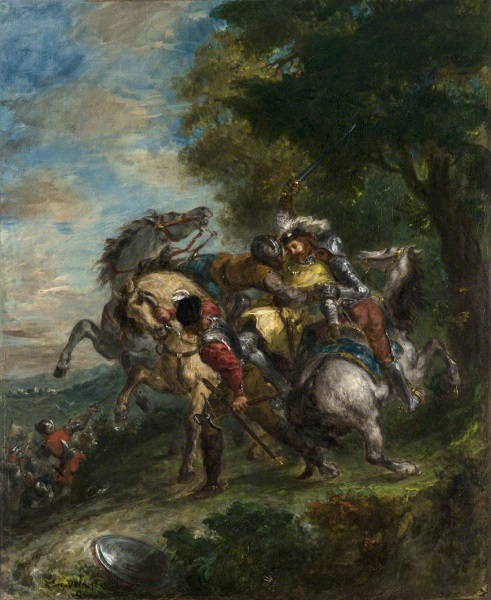 The subject of this painting is an episode from the play Götz von Berlichingen (1773), by the German author Johann Wolfgang Goethe. Weisslingen has been taken prisoner by the soldiers of the heroic knight Götz, and despite the violence of the combat, we see that the protagonist (in yellow) is not injured. The three rearing horses add dramatic vitality, and they are an artist’s inspiration that would be impossible to show on the stage of a theater.

In the year 1853, the Emperor of the Second Empire, Napoleon III (1808-1873) married a Spanish noblewoman, who became Empress Eugénie. Baron Haussmann (1809-1891) became Prefect of the Seine, and he began his project to develop the Grand Boulevards and the numbered districts of Paris. In October, the Crimean War began, joining France in an alliance with Germany and England against Russia. The works of Goethe became popular again, because of how much they showed admiration for knightly valor.

Eugène Delacroix (1798-1863) was inspired by Rubens. He was interested in movement and colors, rather than in the clarity of line. He travelled in North Africa, and his paintings reflect a taste for the exotic. He had a strong stylistic influence on the Impressionist painters of the next generation. His best-known work is the large painting Liberty Leading the People (1830).