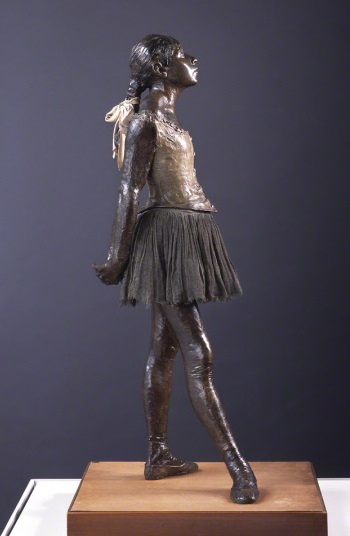 This bronze sculpture has the unusual aspect of being dressed in fabric, tulle and satin. The original version was in wax, and this bronze version was cast around 1920, after the artist’s death. It portrays a real person, Marie van Goethen, who was a student in the School of Dance at the Paris Opera. Her feet are in the "fourth position," and the thinness of her legs and facial features reveals her youth.

The years between 1885 and 1900 are called the "Belle Époque" (beautiful era) of Paris, because of relative prosperity and enjoyment of the arts. There was also a "demi-monde" (half-world) of dancers at the Paris Opera or clubs like the Moulin Rouge in Montmartre. They were sometimes prostitutes or mistresses of wealthy men, as described in Colette’s famous novel Gigi.

The movement of Impressionism was a revolt against academic tradition. Instead of representing objects in a realistic manner, with precise lines and perspective, artists attempted to show a moment of life as it was lived. They tried to capture the light with rapid brushstrokes of vivid color.

Edgar Degas (1834-1917) was the son of a banker. Early on, he studied law. His study of art was in a neoclassical style, but later he became allied with the Impressionists, especially in regard to his pastel works. Racehorses and ballet dancers were frequent subjects for Degas, because of their elegant form and movement. From the 1880s onward, Degas began to lose his sight, and he became more and more interested in sculpture.