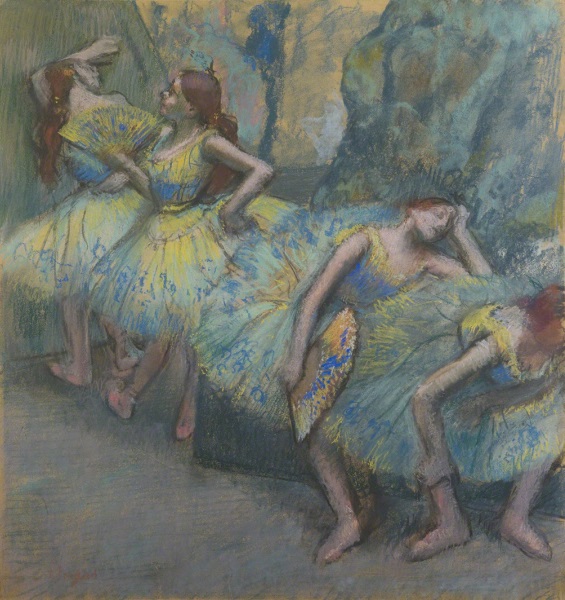 This pastel drawing seems to show several dancers in different poses, but it may in fact be a single red-haired young woman, captured in different contiguous movements in a diagonal composition. They are warming up their muscles in a realistic way, instead of striking artistic poses. The soft colors of yellow and blue are repeated in the scenery, in their tulle dresses, and in the fan.

The years between 1885 and 1900 are called the "Belle Époque" (beautiful era) of Paris, because of relative prosperity and enjoyment of the arts. There was also a "demi-monde" (half-world) of dancers at the Paris Opera or clubs like the Moulin Rouge in Montmartre. They were sometimes prostitutes or mistresses of wealthy men, as described in Colette’s famous novel Gigi.

The movement of Impressionism was a revolt against academic tradition. Instead of representing objects in a realistic manner, with precise lines and perspective, artists attempted to show a moment of life as it was lived. They tried to capture the light with rapid brushstrokes of vivid color.

Edgar Degas (1834-1917) was the son of a banker. Early on, he studied law. His artistic training was in a neoclassical style, but later he became allied with the Impressionists, especially in his pastel works. Racehorses and ballet dancers were frequent subjects for Degas, because of their elegant form and movement. From the 1880s onward, Degas began to lose his sight, and he became more and more interested in sculpture.