Claude Monet, The Promenade with the Railroad Bridge, Argenteuil, 1874 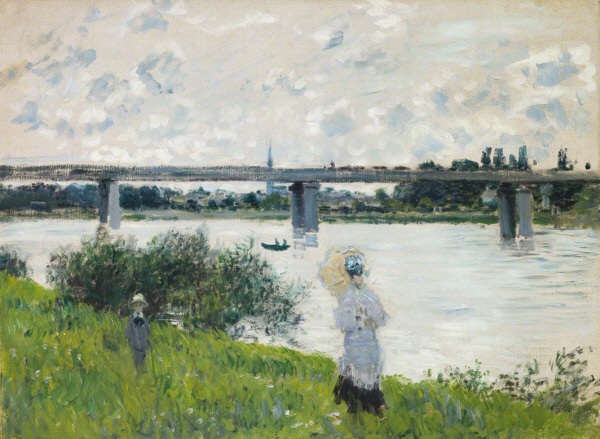 This scene shows a woman and a young boy walking on the banks of the Seine river, near the village of Argenteuil.  They may be the artist’s wife and son.  The presence of the railroad bridge reminds us of modern industrialization, a subject that was not considered worthy in the academic tradition, but which was part of everyone’s real life.  The people seem to play a secondary role in comparison with the river and the sky, the movement of clouds and water, and especially the light.

Around 1870, France suffered not only defeat in the Franco-Prussian War, having lost the provinces of Alsace and Lorraine, but also the civil revolt of the Commune in 1871. The concept of a stable and unchanging ideal seemed to evaporate, both in politics and in art. Many artists who had received an academic training turned away from those ideas and were looking for a different kind of truth.

Claude Monet (1840-1926) is considered to be the father of impressionist painting. His work Impression Rising Sun (1872) inspired the title of the movement. He is best known for a series of paintings of the waterlilies that he cultivated in the pond of his garden at Giverny.