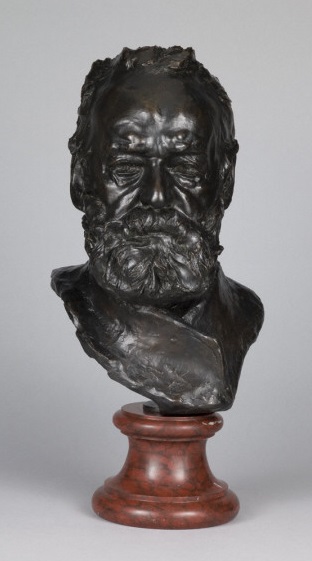 This bust is a portrait of Victor Hugo (1802-1885), the most famous writer of his generation. The author of the books Notre-Dame de Paris and Les Misérables, a poet, and a playwright, he was also involved in politics, and Rodin admired him as a true genius. This portrait is based on drawings that Rodin made in Hugo’s home, because his aging subject could not sit and pose for hours. The artist tried to evoke the visionary spirit, intelligence, and dignity of a modern hero nearing the end of his life.

The Third Republic (1870-1914) was an era of peace in France. In 1884, people were looking forward to the Universal Exposition (World’s Fair) of 1889, celebrating the centennial of the beginning of the French Revolution. The public adored Victor Hugo, and when he died, one year after this bust was made, he was buried in the Pantheon in Paris, near the tombs of Voltaire and Rousseau.