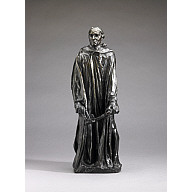 The Burghers of Calais is a monumental sculpture commissioned by the city of Calais. There are twelve copies, in addition to small figures such as these in the Saint Louis Art Museum. In 1347, during the Hundred Years’ War, a group of citizens agreed to be executed, in order to save the life of the town’s other inhabitants. The English queen, touched by their courage, persuaded the king not to condemn them to death. We see the burghers at the moment when death seems certain, and their expressions evoke despair or resignation. The character of Jean d’Aire is the fourth one from the left.

The Third Republic (1870-1914) was an era of peace in France. Prosperous cities commissioned works of art for public display, and anecdotes of local interest were favorite subjects. The Hundred Years’ War had great importance for the city of Calais, because of its strategic location on the English Channel.