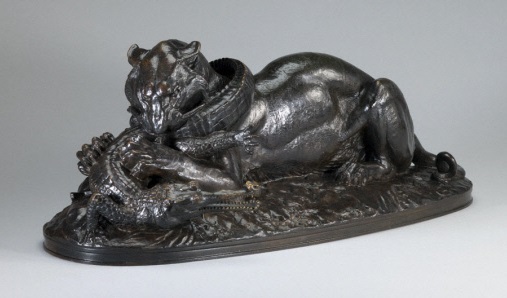 This sculpture shows a tiger attacking a gavial, a type of crocodile from India. The artist has captured a moment of action in a fight to the death. We can imagine the feverish battle that is about to take place. The realistic anatomy and muscle tension of the tiger convey menace and violence, but since the victim itself arouses our fear, the viewer’s reaction is one of curiosity rather than sympathy.

France had just endured a civil revolt, the July Revolution of 1830, which brought the Bourbon dynasty to an end. During this same year, French troops seized the city of Algiers, beginning the war of Algerian conquest (1830-57). This conflict in Africa inspired interest in foreign cultures and in representations of heroism, even in the case of animals.

Antoine-Louis Barye (1796-1875) was a sculptor who was considered the counterpart of Delacroix in painting. He studied animals at the Botanical Garden of Paris, and he imagined them in dramatic situations in far-off countries. This sculpture is a small version of a larger one that was displayed at the Paris Salon in 1831.