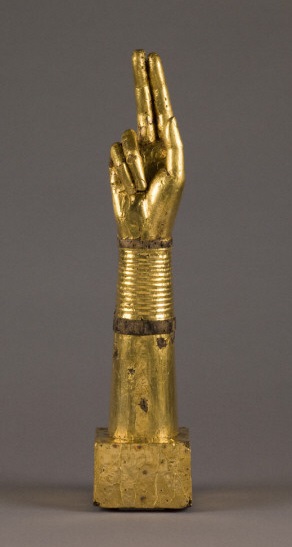 This wooden sculpture, covered in gold leaf, has a small empty chamber inside it, which once held a religious relic. The form of this sculpture suggests that the relic was a piece of bone from a saint’s arm or hand. The raised fingers of the sculpture make a gesture of blessing.

The Catholic faith includes the worship of saints and the objects associated with them. Relics that were preserved from the time when Jesus lived, such as a fragment of wood that was believed to have come from the true Crucifix, had the greatest value. Other relics, however, such as a bone or piece of a saint’s clothing, also had great value. Even a piece of cloth that had touched a relic became a relic itself. Every cathedral needed to have an important relic, to attract pilgrims and therefore attract trade for the town and its inhabitants.

A reliquary is an object in which a religious relic is placed. According to the type and size of the relic, the reliquary could be small or large, a box or a sculpture. Reliquaries were found in the chapels of kings and in the treasuries or on the altars of great churches, so they were created by the best artists and decorated with the most precious materials.