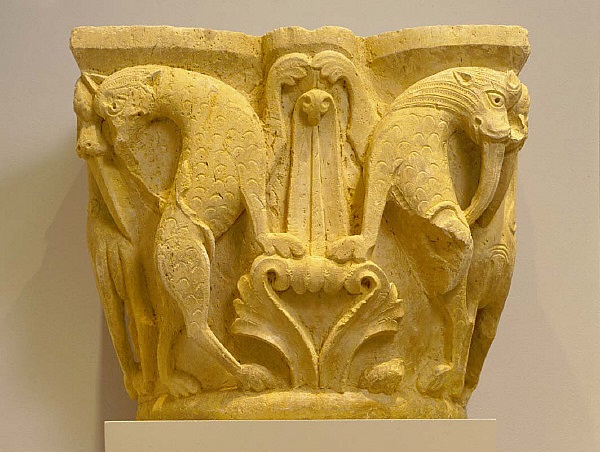 This capital was part of a group of architectural fragments, found near the church in the town of La Charité-sur-Loire in Burgundy. It represents stylized animals with cat-like ears, perhaps lions, because of the references to this beast in the Bible. The lion was the symbol of the House of Judah, from which King David was descended. It should be noted, however, that the sculptor of this capital had probably never seen a real lion. The one on the right seems to have a mane, and would therefore be a male, and the one on the left is lacking one, and is therefore a female. The half-moon markings on their skins, however, do not resemble the fur of a lion.

In the early 1100s, architectural knowledge had not yet progressed enough to enable the construction of gothic cathedrals. Catholic churches had thick walls and rounded arches, in the style called "romanesque." The church of Notre-Dame (Our Lady) in La Charité-sur-Loire, which was consecrated in 1107, was at that time the second largest church in Europe, after the Cluny Abbey in Paris.

The ceilings of a church nave required many support columns. These columns were of stone, and the top part was called a capital, after the Latin word caput, meaning head. In the romanesque style, capitals were often sculpted with representations of animals, plants, or geometric symbols. They frequently had symbolic images derived from the Old Testament, in order to emphasize the linkage that was believed to exist between the Old and New Testaments.