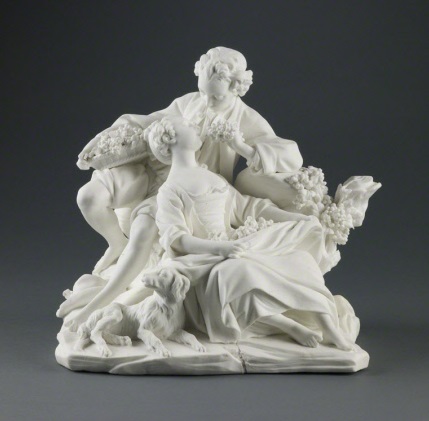 This small porcelain figure shows a young couple who have just picked some grapes. The young man is feeding grapes to the young woman. They are wearing clothes and hairstyles of the upper class, but their bare feet associate them with country people. The presence of the dog, who is alert to something off to its right, adds an amusing touch.

The technique of making ceramics, already known in China, was further developed in 18th- century Europe. This allowed artists to create very delicate works. Each piece had to be fired in the kiln several times, at very high temperatures (2,012º F), and therefore could break easily. A ceramic sculpture as detailed as this one was considered rare and valuable.

In the artistic style known as "fête galante," young couples in love are shown relaxing in the outdoors. The characters are often imaginary peasants, such as shepherds and shepherdesses, but they resemble nobles in the elegance of their bodies, gestures, clothing, and hairstyles. Fine porcelain sculpture imitated characters and situations from the "fêtes galantes," as well as characters from the popular theater of the time. When porcelain is not painted, it resembles stone sculptures from antiquity, which makes it appear even more "noble," even if its subject is contemporary.

The porcelain factory in Sèvres was founded in 1756, by the order of Louis XV and Madame de Pompadour. It was intended to rival the famous factory of Meissen in Germany. The Sèvres artists were men, and the one who created this work is unknown, but François Boucher made designs for many Sèvres porcelain figures.