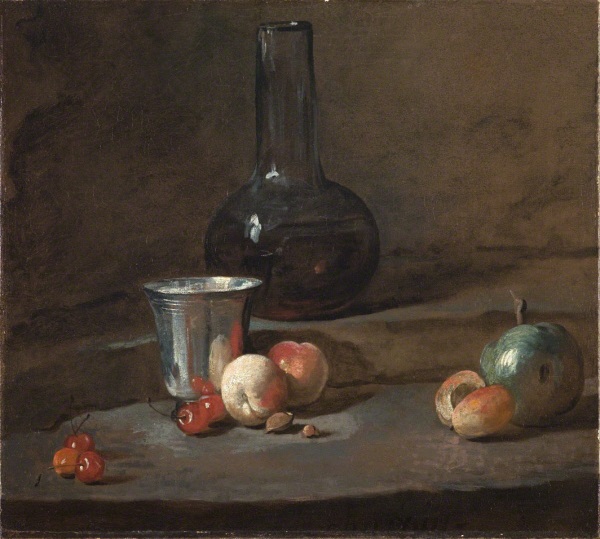 This painting is a still life. It is composed of ordinary objects that one might find in a house, but not a house of peasants. The silver goblet and the glass carafe, instead of vessels made of clay, reflect an elevated social status. The objects probably belonged to the artist himself. The painter was interested in the play of light and in the reflections on the smooth surfaces of the silver, the glass, and the fruit.

The middle class expanded in the first half of the eighteenth century, and buying paintings was no longer an activity reserved for the nobility. Familiar subjects of daily life attracted as much attention as scenes from mythology had attracted previously, especially in public exhibitions.

Since the early seventeenth century, the still life was a subject of artists’ interest, especially in Holland. Chardin is considered to be a descendant of this tradition. He was interested in the forms and textures of objects, rather than in their symbolic importance, and he influenced many artists of later generations, such as Cézanne, Matisse, and Braque.

Jean Siméon Chardin (1699-1779) was a student at the Academy of Saint Luke in Paris, and later he was admitted to the Royal Academy of Painting and Sculpture in the category of painters of "animals and fruits," a less prestigious category than history painting or portraiture. He is recognized today for his still lifes, such as The Ray (1728) and for his genre scenes, such as Soap Bubbles (1734) and Saying Grace (1740).