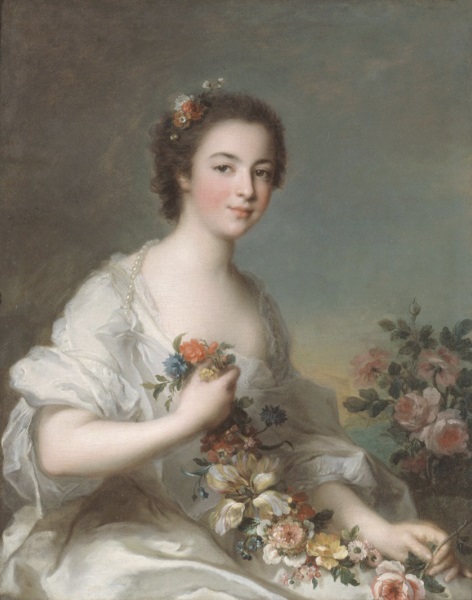 This portrait shows a lady whose identity is unknown to us. She is a noblewoman of the contemporary era, because of her silk dress and the pearls on one shoulder, but she may be shown as the goddess Flora. Her dark hair and eyes contrast with the luminous whiteness of her skin. There is an abundance of flowers in the painting, in her hair and in a garland that she holds in her right hand. Her left hand holds a rose that seems to have been plucked from the rosebush to her left.

In the eighteenth century, in many countries of Europe such as France and England, it was fashionable for portraits to show noble ladies as goddesses of mythology.

The idealized and flattering portrait always remained popular among the nobles who commissioned them. Artists often called upon many of the senses to represent feminine grace, such as touch (the silk and chiffon of her robe, the smooth surface of the pearls) and smell (flowers, especially roses).

Jean-Marc Nattier (1685-1766) was a very successful portrait artist at the royal court. A member of the Royal Academy of Painting and Sculpture since 1718, and a Professor at the Academy since 1746, he was named the official portraitist of Louis XV in 1748.