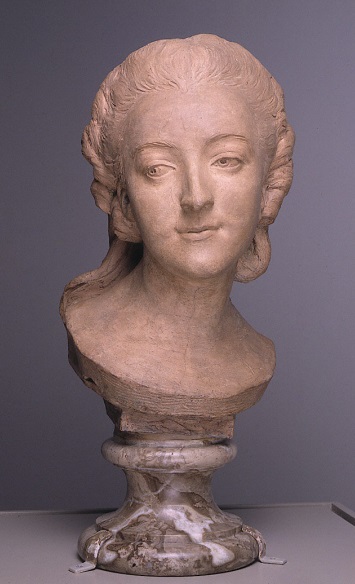 This terra cotta bust is a portrait of Madame du Barry, the mistress of King Louis XV. It was the model for a marble bust, now lost. The angle of the head, tilted and turned toward the right, suggests modesty, but the sideways glance may also seek to conceal a cast in one eye. The facial features evoke youth and beauty without any ornamentation of clothing or hairstyle.

In 1768, King Louis XV, who was then 59 years old, took as his mistress Jeanne Bécu, a 25-year-old illegitimate milliner who was then the mistress of the Count du Barry. The king arranged a marriage between Jeanne and the Count’s brother, and the royal affair continued until the king’s death in 1774. Criticized for her common origins, Madame du Barry was despised by the court and by the common people. She was guillotined during the Revolution, in 1793.

The realistic portrait was very much admired at the royal court, ever since the great success of the artists Nicolas de Largillière, Hyacinthe Rigaud, and Maurice Quentin de La Tour. Noble subjects were often represented in informal clothing, and the artist emphasized their personality traits rather than symbols of their wealth or social rank.