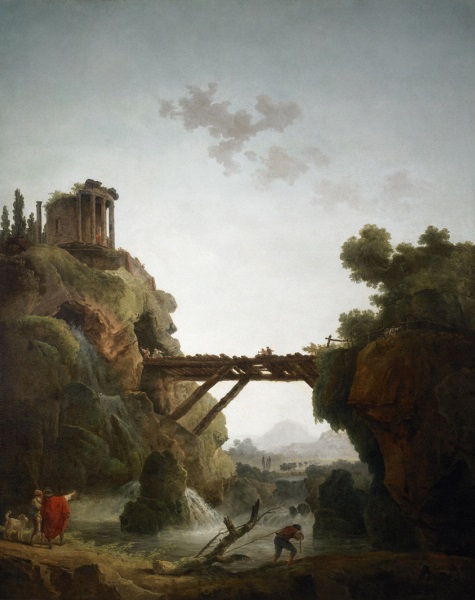 This painting presents an imaginary scene of Tivoli, a town near Rome. In classical antiquity, many wealthy people had country villas there. The scene takes place in the contemporary era, since we see the ruined Temple of the Sibyl on top of the hill on the left. In the center, we see a half-ruined bridge, on which very small figures are in danger of falling off. On the lower left, a man with a red cape and his companion appear to be tourists, while on the lower right another man seems occupied with some unknown task.

In Europe during the 17th and 18th centuries, an important part of a wealthy young man’s education was a trip to Italy, called "the Grand Tour." It was believed that seeing historic sites from classical antiquity, especially in the city of Rome, would have a positive influence on his taste and his morals. Classical ruins were the subject of admiration, but were also a reminder that the Roman Empire had fallen, in spite of its former greatness.

Many French and Italian artists made paintings and engravings, sometimes embellished by their imagination, to sell as travel souvenirs. It was very fashionable, especially in England, for noblemen to have paintings of ancient ruins. In addition, they enjoyed decorating the gardens of their estates with statues and architectural fragments that they had purchased during their own "Grand Tour."

Hubert Robert (1733-1808) anticipated romanticism in his works. The luminous atmosphere in his paintings evokes the sublime. His preference for the subject of antique ruins earned him the nickname of "Robert of the Ruins."